The home cinema is the big Hollywood celebrity of the smart home specification game. Everybody knows them, most people like them, and you don’t have to put them in the middle of a complicated plot to get people interested.

Before we start – Welcome to Smart Spotlight

Smart spotlight is a regular feature where we’ll be taking a closer look at one of the aspects of a smart home for homeowners and home designers alike. We’ll be asking what it is, why you might want one, and what you might want to think about when buying or specifying one. It’s more of an introduction to ideas than a technical deep dive. Either way, we hope you like it.

The rise of the smart home cinema 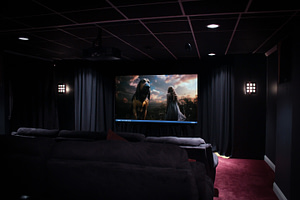 For as long as I can remember, TVs have stood firm at the top of the home appliance popularity stakes. Most of us spend longer staring at them than our beloved ovens, fridges, and washing machines put together and demand for them transcends class and earnings. Millionaires and minimum wagers alike are wont to invest significant portions of their income in getting the right one.

It’s probably no surprise then that their descendants – smart TVs and home cinema systems - have led the way for smart tech, selling hundreds of millions when many smart home appliances are still pushing to manage a hundred thousand.

Like televisions before them, smart TVs have diversified to satisfy every niche and income bracket. While you can grab a cheap 'smart' TV for £200, the smart home cinema and its elusive sibling, the media room have risen to occupy the upper echelons of the AI-TV market.

Premium offerings offer far more than a massive screen on one wall: Smart media management, lighting, heating, air conditioning and audio compliment mind-blowing interior design and some serious screen-seating comfort to create a unique experience in front of the screen. Meanwhile, ultra-HD TV, multimedia services, gaming and smart home control give a whole host of spectacular options on the screen.

As you may have guessed, home cinemas and media rooms occupy significant spaces within the home. When designing a home cinema as a professional, be prepared to match the impressive piece of tech that occupies that one wall with something equally breath-taking between the other three. For many homeowners, the home cinema is an opportunity to express their wild and hedonistic side within the home. Think snazzy lighting, super cool décor and ridiculously comfortable seats that are often prone to vibrate and change temperatures on command. Some go for smooth and sophisticated, instead of hedonistically overloaded, while others opt for the traditional dark walls and subdued lights. When the film comes on, it’s all in the dark anyway, right?

So what’s a media room?

We know what you’re thinking. A media room sounds like somewhere the PM might tell the nation about hands, face and space, or that place in every spy film with an unfeasibly large number of TV screens. In fact, there’s very little to distinguish it from the home cinema.

Despite the formal-sounding name, media rooms are often cosier and more relaxed than home cinemas in layout. More like living rooms where families can be together than theatres where audiences sit in rows. While the cinema / TV is still a major focus, media rooms often incorporate other home comforts and sources of entertainment, from VR goggles to mini dance floors to pool and football tables.

All it literally means is a space where people can gather to enjoy high-quality media.

Why have a home cinema – The benefits

This could be one of the shortest benefits sections in this series. While it takes a while to explain why one might want smart air conditioning, the benefits of a home cinema are obvious. I can sense the film buffs and binge-watchers getting excited as I write. For the sake of appearance though, I’ll lay out the main benefit:

The home cinema is your own private cinema...

...Not to mention games room, and super-hedonistic TV space. You can decorate it how you want, enjoy all the comfort you want and watch whatever you want, all at a cinematic scale with first-rate audio and visual tech.

Who is it for?

As already mentioned, film buffs and Netflix bingers will love this option, as well as gamers who want to level up their playing time. But the home cinema and media room is also a great option for those who like to share family time enjoying something a bit different. Those who like to entertain can also get a lot out of a home cinema, inviting friends round for a blockbuster night or simply a supersized viewing of the latest Goggle Box episode.

Smart cinemas and media rooms can also be useful for businesses, providing for unforgettable pitches and presentations that competitors can’t match. They can be especially useful for highly visual high-ticket industries such as design, advertising or holiday sales.

The main point to make about home cinemas is that, unlike many smart home options, they require a big space commitment. In most cases they will require their own room, although they can integrate well with games rooms and dance floors, which can benefit from a shared or linked sound system. These would generally be installed behind the cinema seats, which are often in rows or a horseshoe shape facing the screen.

Media rooms are generally more flexible and can range from fairly focused setups to living rooms with a little extra investment in audio-visual tech.

To a greater or lesser extent in both cases, allowances for sight lines and audio fidelity place strict limits on some design aspects of the room. Meanwhile, the desire for a little flare in this room can make for some exciting and demanding design briefs. Lighting design and light exclusion are also fundamental to a good home cinema.

Home cinemas and media rooms are highly desirable and very enjoyable. For home developers and designers, they’re easy to sell, but hard to specify. The benefits and the type of people who want them are both obvious. However, there are many occasions when layout or cost may require the owner to compromise on their idea. For new builds, layouts can be designed, but constraints are significant compared to other aspects of the smart home.

If you’re an owner and you really want a home cinema or a developer committed to providing one, we can support you to create an enjoyable highlight in almost all cases though. Find out more about our home cinema and audio visual offerings on our dedicated page.  When you’re in the room eating popcorn and enjoying your favourite movie on the huge screen, you’ll know that it was worth it!

If all this talk of home cinema has given you a taste for movie magic in your home, book in a meeting to start planning yours below.